Anti-cyclic citrullinated peptide antibodies (ACCP) have recently been identified as highly specific diagnostic markers in rheumatoid arthritis (RA). They belong to the family of autoantibodies directed to epitopes containing the non-standard amino add citrulline. Citrullination is the post-translational conversion of arginine to citrulline by an enzyme called peptidylarginine deaminase (PAD). This conversion on synthetic peptides allowed high- affinity binding of the peptide to the MHC. 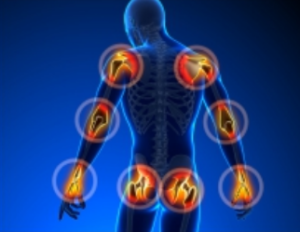 This binding could result in immune cell activation and subsequently a directed immune response against citrullinated peptides and production of ACCR The demonstration that citrullinated peptides bind to the shared epitope  MHC supports the hypothesis that an arthritogenic antigen exists and plays a pathogenic role in RA. Thus, ACCP antibodies may be a marker for this phenomenon. ACCP also include antiperinuclear factor, anti-keratin and anti-filaggrin antibodies. ACCP have significant predictive value, as they can be found very’ early, sometimes even during the pre-clinical phase of RA. Their presence is also associated with more destructive joint damage and aggressive course of the disease.